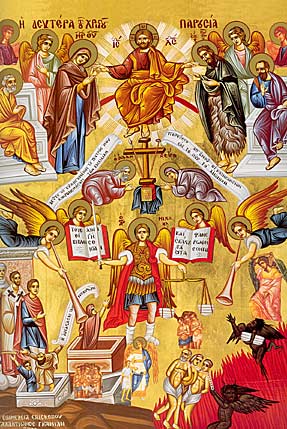 The Gospel reading appointed for Meatfare Sunday comes from the Gospel according to St Matthew and concerns the Last Judgement. Christ speaks to us concerning in what manner we will eventually be judged when He returns. Rather than pointing out that the righteous will consist of those who simply ‘believe’ in God and lead a good life, or even those who go to Church every Sunday, Christ tells us that it is not solely our faith, but also our actions that will determine our final destination. Jesus is more concerned about how we act toward those around us, and in particular, towards those less fortunate.

One of the important things that Christ teaches us through His message is that whatever we do to the next person, we do the same to Christ also. And it brings up the important fact that the true Christian is the one who sees Christ in everyone. All are created in the image and likeness of God; we are all (or at least strive to be) living icons of Christ. And it’s when we recognise that image of Christ in everyone (including our ‘enemies’) that we gain a step closer to residing in the mansions of the Father that have been prepared for us.

The next time that you set out to destroy someone’s reputation, break someone’s heart, show indifference and even ignorance toward a person, or maliciously gossip about someone, remember that Christ says that you’re doing exactly the same thing to Him! And whatever you do wrong to the next person will count against you when the Righteous Judge returns. We Christians can sometimes be judgemental toward those around us (both in and out of the Church), and yet we don’t stop to think that this will reflect on Christ Himself. We take the duty of the Judge and make judgement against the Saviour. We really need to see that icon of Christ in everyone no matter who they are.

We also need to ACT as Christians, and what this means is pouring out your heart and resources to those less fortunate around us. Great and Holy Lent is a time for repentance, change, and renewal in our lives. It’s also a time to evaluate what we have done in terms of caring for our neighbour. Use this time leading toward Holy Pascha to do something about ACTING like an Orthodox Christian, rather than merely thinking like one.

Sunday of the Last Judgement

When you shall come, O righteous Judge, to execute
just judgment, seated on Your Throne of glory, a river of fire
will draw all men amazed before Your judgment seat; the
powers of heaven will stand beside You, and in fear mankind
will be judged according to the deeds that each has done.
Then spare us, Christ, in Your compassion, with faith we
entreat You, and count us worthy of Your blessings with
those that are saved.

The books will be opened and the acts of men will be
revealed before the unbearable judgment-seat; and the whole
vale of sorrow shall echo with the fearful sound of
lamentation, as all the sinners, weeping in vain, are sent by
Your just judgment to everlasting torment. Therefore, we
beseech You, O compassionate and loving Lord: spare us
who sing Your praise, for You alone are rich in mercy.

The trumpets shall sound and the tombs shall be
emptied, and all mankind in trembling shall be raised. Those
that have done good shall rejoice in gladness, awaiting their
reward; those that have sinned shall tremble and bitterly
lament, as they are sent to punishment and parted from the
chosen. O Lord of glory, take pity on us in Your goodness,
and count us worthy of a place with them that have loved

THE FIRST AND SECOND FINDING OF THE PRECIOUS
HEAD OF THE HOLY, GLORIOUS PROPHET,
FORERUNNER AND BAPTIST JOHN

After many years, this property passed into the
possession of a government official who became a
monk with the name of Innocent. He built a church and
a cell there. When they started to dig the foundation,
the vessel with the venerable head of John the Baptist
was uncovered. Innocent recognized its great holiness
from the signs of grace emanating from it. Thus
occurred the First Finding of the Head. Innocent
preserved it with great piety, but fearful that the holy
relic might be abused by unbelievers before his own
death he again hid it in that same place, where it was
found. Upon his death, the church fell into ruin and was
destroyed. During the days of Saint Constantine the Great, when Christianity began to flourish, the holy Forerunner appeared twice to two monks journeying to Jerusalem on a pilgrimage to the holy places, and he revealed the location of his venerable head. The monks uncovered the holy relic and, placing it into a sack of camel-hair, they proceeded homewards. Along the way, they encountered an unnamed potter and gave him the precious burden to carry. Not knowing what he was carrying, the potter continued on his way. But the holy Forerunner appeared to him and ordered him to flee from the careless and lazy monks, with what he held in his hands. The potter concealed himself from the monks and at
home, he preserved the venerable head with reverence. Before his death, he placed it in a water jug and gave it to his sister. From that time the venerable head was successively preserved by devout Christians until the priest Eustathius (infected with the Arian heresy) came into possession of it. He beguiled a multitude of the infirm who had been healed by the holy head, ascribing their cures to the fact that it was in the possession of an Arian. When his blasphemy was uncovered, he was compelled to flee. After he buried the holy relic in a cave, near Emesa, the heretic intended to return later and use it for disseminating falsehood. God, however, did not permit this. Pious monks settled in the cave, and then a monastery arose at this place. In the year 452 Saint John the Baptist appeared to Archimandrite Marcellus of this monastery and indicated where his head was hidden. This became celebrated as the Second Finding. The holy relic was transferred to Emesa, and later to Constantinople.