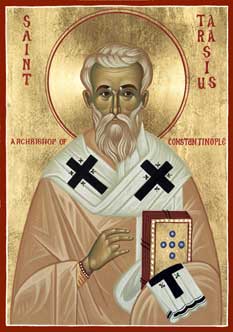 Tarasius is believed to have been born about 730, in Constantinople, the son of a high ranking judge. He was of illustrious lineage, related to important families including the family of the future Patriarch Photius the Great. He received a fine education and embarked on a career in the secular administration of the empire. He was promoted rapidly at the court of the emperor Constantine VI and his mother, the Empress Irene. He attained the rank of senator and eventually became imperial secretary (asekretis) to Constantine VI and his mother, Irene.

At that time the Church was agitated by the turmoil of the iconoclast disturbances. Patriarch Paul IV, who had formerly supported Iconoclasm but later repented, resigned his office due to old age and illness. He withdrew to a monastery, where he took the schema. When the Empress Irene and her son Constantine came to him for advice concerning the patriarchate, Paul told them that his most worthy successor would be Tarasius, who at the time was still a layman. Even though he was a layman, he, like all educated Byzantines, was well versed in theology, and the election of qualified laymen as bishops was not unheard of in the history of the Church.

When approached by the emperor and empress, Tarasius refused the position for a long time, considering himself unworthy of the high office. In time, he gave in with the condition that an Ecumenical Council be convened to address the Iconoclast heresy.

Beginning as a layman, Tarasius was taken quickly through the Holy Orders, ordained first a deacon, then a priest, before consecration as bishop. On December 25, 784, Bp. Tarasius was enthroned as patriarch of Constantinople

On August 17, 786, the council was convened in the Church of the Holy Apostles to consider the issue of iconoclasm. However, the council was suddenly invaded by mutinous troops who dispersed the delegates. It wasn’t until the following year, in September 787, that the council was again convened, this time in Nicea. In attendance were 367 bishops. With Patr. Tarasius presiding, the council, known also as the Second Council of Nicea, condemned Iconoclasm and formally approved the veneration of icons. Patr. Tarasius assumed a moderate policy towards the former Iconoclasts, which caused the opposition of Theodore the Studite and his partisans. However, those bishops who repented of their iconoclasm were again received by the Church.

About a decade later, in January 795, Tarasius became involved in emperor Constantine’s divorce of his wife, Maria of Amnia. By the divorce, emperor Constantine slandered his spouse, the empress Maria, the granddaughter of St. Philaretos the Merciful, so that he could send Maria to a monastery and free himself to marry his own kinswoman, Theodote. The monastic community was scandalized. Patr Tarasius, however, refused to dissolve the marriage of the emperor, for which he fell into disgrace. Soon, however, Constantine was deposed by his own mother, the Empress Irene.

Patr. Tarasius led the Church for twenty-two years. He lived a strict ascetic life. Frugally, he spent his money on God-pleasing ends, feeding and giving comfort to the aged, to the impoverished, and to widows and orphans. On Holy Pascha, he set out a meal for them, that he served himself. Tarasius continued to serve loyally through the subsequent imperial regimes of Irene and Nikephoros I. His ability to work with three different monarchs contributed to his continuation in office until his death.

Patr. Tarasius reposed on February 25, 806 in Constantinople. He was buried in a monastery he built on the Bosphorus.