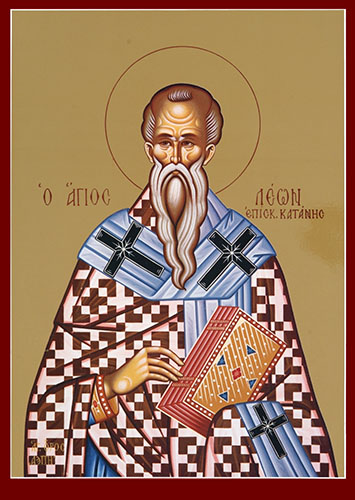 This Saint, who was from Ravenna in Italy, lived during the reign of Leo the Wise and his son Constantine Porphyrogenitus (end of the ninth and beginning of the tenth centuries). He struggled especially against the paganism and sorcery still prevalent in those regions.

Apolytikion of Leo, Bp. Of Catania in the Fourth Tone

A model of faith and the image of gentleness, the example of your life has shown you forth to your sheep-fold to be a master of temperance. You obtained thus through being lowly, gifts from on high, and riches through poverty. Leo, our father and priest of priests, intercede with Christ our God that He may save our souls.

Kontakion of Leo, Bp. Of Catania in the Second Tone

With songs let us all crown him who was dedicated to the Lord from infancy, and who from his swaddling bands received grace from God, even Leo, the luminary and defender of the Church; for he is her support.