Second Saturday of the Great Fast: All Souls Saturday 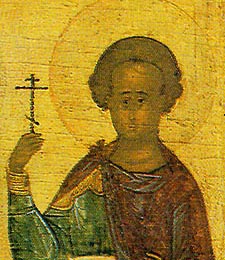 Second Saturday of the Great Fast: All Souls Saturday.

The Holy Martyr Sabinus was administrator of the Egyptian city of Hermopolis. During a persecution of Christians under the emperor Diocletian (284-305), Saint Sabinus and some like-minded companions hid in a remote village.

His hiding place was revealed by a certain ungrateful beggar who had brought him food. The saint used to feed him and help him with money, but the man betrayed him for two pieces of gold. Sabinus was seized with six other Christians, and after torture they were all drowned in the Nile in 287.

The Holy Martyr Papas lived in the city of Laranda (Asia Minor) during the reign of Maximian (305-311). They arrested and tortured him for his belief in Christ. His feet were put into boots with sharp nails hammered into the soles, and made to walk. They took him to the city of Diocaesarea and later to Seleucia, Isauria to stand trial.

St Papas died bound to a barren tree, which then became fruitful.