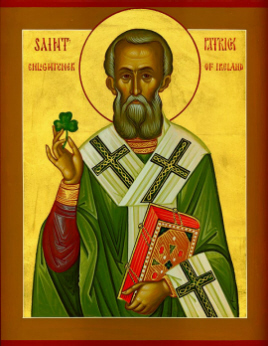 BISHOP AND PATRON SAINT OF IRELAND

St. Patrick, (flourished 5th century, Britain and Ireland; feast day March 17), patron saint and national apostle of Ireland, credited with bringing Christianity to Ireland and probably responsible in part for the Christianization of the Picts and Anglo-Saxons. He is known only from two short works, the Confessio, a spiritual autobiography, and his Letter to Coroticus, a denunciation of British mistreatment of Irish Christians.

Before the end of the 7th century, Patrick had become a legendary figure, and the legends have continued to grow. One of these would have it that he drove the snakes of Ireland into the sea to their destruction. Patrick himself wrote that he raised people from the dead, and a 12th-century hagiography places this number at 33 men, some of whom are said to have been deceased for many years. He also reportedly prayed for the provision of food for hungry sailors travelling by land through a desolate area, and a herd of swine miraculously appeared. Another legend, probably the most popular, is that of the shamrock, which has him explain the concept of the Holy Trinity, three persons in one God, to an unbeliever by showing him the three-leaved plant with one stalk. Traditionally, Irishmen have worn shamrocks, the national flower of Ireland, in their lapels on St. Patrick’s Day, March 17.