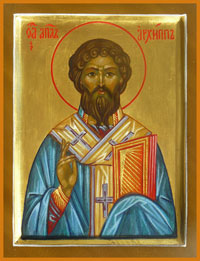 Archippus was one of the Seventy Apostles. The Apostle Paul mentions him in his Epistles to the Colossians and to Philemon. “And tell Archippus, ‘See that you fulfill the ministry that you received in the Lord’ ” (Colossians 4:17) as well as in his letter to Philemon calling him his fellow soldier in the battle: “To Archippus our fellow soldier” (Philemon 1:2). In the town of Colossae, the center of Christianity was in the home of Philemon. Here Christians gathered for prayer. In writing to Philemon, the Apostle Paul called this “the church at your house” (Philemon 1:2). At that time, the apostles ordained their disciples as bishops; some of them in permanent places and others as missionaries traveling to various places. Philemon was one of the latter. Apphia, Philemon’s wife, hosted and served in the domestic church! At the time of a pagan feast to the goddess Artemis, according to their custom, all the faithful in Colossae, gathered in the home of Philemon for prayer. The pagans, learning of this gathering, rushed and apprehended all the Christians; Philemon, Apphia and Archippus, as leaders. At first, they were whipped and afterwards they were buried up to their waists and they began to stone them. Thus, they killed Philemon and Apphia and, Archippus they removed from the pit barely alive and left him to the amusement of the children. The children pierced him throughout with knives. Thus, this “fellow soldier” in battle ended well in the course of his earthly path.