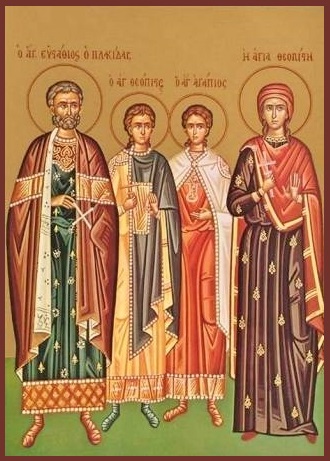 These holy Martyrs contested during the reign of Diocletian (284-305), in Palestinian Caesarea. All eight were very young; only Agapius was a baptized Christian. Urbanus, the governor of the region, observed a pagan festival by having some Christians publicly tortured and executed: some by fire, others on the gallows, some by being thrown to wild beasts in the arena.

Six of the youths (Timolaus, Dionysius, Romulus, Plesius, and two named Alexander), seeing the patience and serenity with which the Christians endured their torments, were reached by the Holy Spirit and, tying their own hands, presented themselves to Urbanus saying ‘We too are Christians!’ They were immediately cast into prison.

A few days later Agapius, a prominent Christian in that town, also presented himself along with a second Dionysius. All eight were beheaded together at Caesarea. Their martyrdom is recorded in Eusebius’ Ecclesiastical History.